How to Pick a Duvet and Duvet Cover 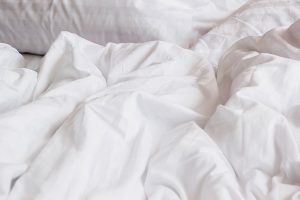 I love a fluffy duvet!  They are oh so cozy and look so inviting. They are the marshmallow on the hot chocolate of bedding. They would make an ultimate pig in a blanket!  They are the bedding that shows up in your dreams when you think of snuggling in bed and getting tangled in the sheets.

But not all duvets are the same here are a few tips for picking out the perfect duvet and duvet cover for you!

Duvet – a soft quilt filled with down, feathers, or a synthetic fiber, usually used with a cover.

Duvet Cover – The cover you put a duvet in.  It’s like a giant pillow case for your duvet.  It keeps your duvet clean and sanitary and often takes the place of the top sheet and blankets.

Down – Soft fluffy feathers used as the fill in a duvet.  Usually from a goose.

How to pick the warmth of a duvet

All season – a middle of the road duvet as far as warmth.  It will probably do the job for most seasons but if you live in climates that get very warm or very cold you might not be comfortable all of the time.  Typically a Fill Power of 400 – 600.

Winter or Heavy – These are for the coldest climates and will keep you toasty warm.  If you don’t live in areas with a lot of cold or keep your AC cranked down you probably don’t need this one.  Typically a Fill Power of 600 plus.

Summer or Light weight – These provide the lease amount of warmth.  Perfect for warmer climates or if you sleep hot. Typically a Fill Power of 400 or below.

The Material of the Duvet

You want to check what your duvet is actually made off.  Look for 100% cotton! It will be the softest

and age really well.  Also pay attention to the thread count of your duvet. You typically want the highest thread count possible but I feel anything over 500 is pretty good.  The higher the thread count the tighter the weave will be and the material will keep the down contained better.

Pay Attention to the Construction

Get a Duvet Cover

Check your duvet and duvet cover and make sure they are machine washable.  It’s a pain in the butt to have to drag your bedding to the dry cleaners when it needs it.  And it’s expensive too!